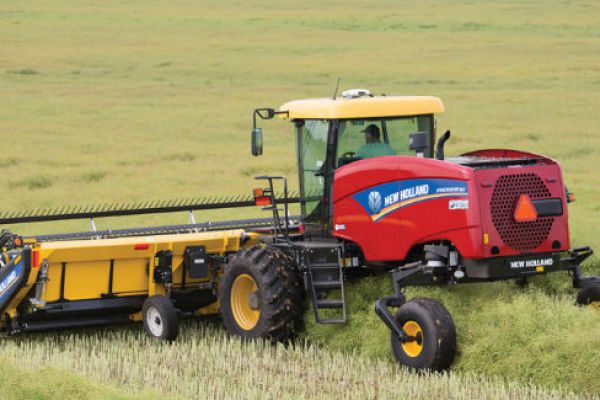 SMART INNOVATION: THE SPEEDROWER® LEGACY CONTINES.
The Speedrower® self-propelled windrower name is synonymous with unparalleled efficiency, durability and the brute power required to meet any crop head-on and cut or swath it in record time. A lot has changed on these windrowers through the years, but one thing has not. You can depend on the New Holland Speedrower because of its proven record of reliability and performance for over 50 years. That heritage continues with the newest models. We are continuing to raise the bar and put even more power, efficiency, and of course SPEED into the newest Speedrower!

STEP INTO THE NEXT GENERATION OF AWESOME
The latest Speedrower windrowers set the standard with best-in-class operator comfort, increased horsepower, fuel efficiency, and advanced Tier-4B-compliant engines. Now you can have the advantage of New Holland’s proven ECOBlue™ engine technology that’s been tackling tough jobs in New Holland tractors for over four years. Plus, the new Speedrowers look great with updated styling that is functional too!
- Less

SMART INNOVATION: THE SPEEDROWER® LEGACY CONTINES.
The Speedrower® self-propelled windrower name is synonymous with unparalleled efficiency, durability and the brute power required to meet any crop head-on and cut or swath it in record time. A lot has changed on these windrowers through the years, but one thing has no... + Read More

Fields with asterisks* are required. Please email our helpful staff with any questions or comments using the contact form.

Send to a friend »

Send To A Friend

Fields with asterisks* are required. Your friend will receive an email that contains a reference to this page. Please send this email only to people you know who would be interested in this information.

BRUTE POWER WITH A FUEL CONSCIENCE

The new Tier 4B Speedrower® Series engines offer the best of all worlds: increased power and performance combined with improved fuel efficiency—all in a cleaner-burning engine that’s built New Holland SMART. How much better can it get? New Holland achieves Tier 4B emissions levels with a Selective Catalytic Reduction (SCR) system, employing diesel exhaust fluid (DEF), and a Diesel Oxidation Catalyst (DOC) Canister.

• Exhaust gases leave turbo outlet and travels through the DOC canister, where precise amounts of DEF are injected into the exhaust stream
• DEF quickly vaporizes and converts to ammonia and carbon dioxide (the basic elements of DEF)
• Exhaust, carbon dioxide and ammonia pass into the SCR chamber
• In the SCR canister, carbon dioxide is neutralized and the ammonia catalytically reacts to NOx
• After the catalytic reaction, the harmless nitrogen vapor and water vapor are released through the exhaust pipe to the atmosphere

The new Tier 4B engines, combined with programmable throttle, lead to maximum fuel efficiency, resulting in decreased operating costs. The programmable engine throttle allows you to set the engine speed to just what you need, creating even more fuel savings. The reduction in fuel consumption means fewer fill ups, allowing for more uninterrupted time in the field. Now, the Speedrower goes further and longer without stopping to fill up.

The Speedrower cooling system is designed to suit the cooling needs of each model and offers increased cooling capacity compared to previous models. The rotary air screen housing is made of steel and creates a tight seal, resulting in improved performance. The wand and duct system is a full third larger than previous models and the rotary screen motor has been upgraded to ensure the screen is continually cleaned. When working in extreme temperature conditions, add the optional diesel fuel cooler for a clean efficient burn to capture more horsepower from every gallon of fuel.

The new Speedrower Tier 4B 6-cylinder engines provide an impressive 10% boost in engine horsepower, and the 4-cylinder upgrade to electronic common-rail fuel delivery provides an amazing 20% increase over the prior Tier 3 model. With more torque than before, Speedrower windrowers are the right choice to climb hills, and power through the tough stuff with reliable power when you need it most.

New Holland’s continued innovation has led to an optional three range hydrostatic drive that produces transport speeds up to 24 mph, making it the SMART choice when you need to move quickly between farm and field. Time is a nonrenewable resource, and Speedrower® windrowers get you there faster than any other self-propelled windrower does today.

SAVE FUEL WITH ROADCRUISE™ TRANSPORT MODE

New Holland has not only enhanced the speed of the Speedrower windrower, but also improved the handling of the machine, creating greater control. Greater control provides the foundation for the increase in speed. The hydraulically controlled steering system allows for precise steering at higher speeds. All Speedrower self-propelled windrowers are equipped with 9-degree swivel post casters, and all models equipped with high-speed transport also feature shock absorbers to prevent caster shimmy for better handling during transport.

For optimum handling and control, the rear ballast is easily adjusted to match the requirements of the header. The optional front ballast box provides stability and traction during transport when the header is detached.

Let us help you get moving.